It looks like from time to time I'm going to have to give this prestige honor out because some of us just can't do right...ever. This year's first recipient of the award goes to Jason Kidd. 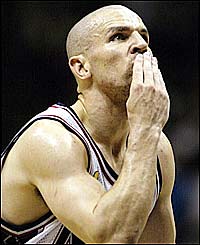 Yes, Jason Kidd. Why is he a recipient of this award you ask? 'Cause for reasons beyond his control he couldn't manage to treat his wife right and now they're divorcing. It get's better though. He's accusing her of "extreme cruelty" throughout their marriage. Jason filed for divorce a day after he filed a domestic violence complaint seeking a restraining order against Joumana. 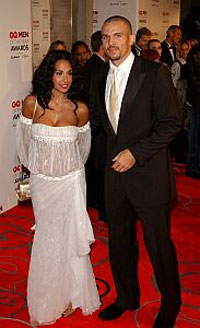 Ohhh, so now she's the one beating you up, ehh Jason??? Give me a fuckin' break. The divorce filing came less than a day after the 33-year-old NBA player filed a domestic violence complaint seeking a temporary restraining order against his wife. Jason, I personally never let you off the hook for punching homegirl in the mouth back in 2000. He was and will forever be a punk to me. Punched, not even slapped, her in the mouth over a french fry. Now he's filing complaints of domestic abuse. He needs to be punched in the gut.


I couldn't let this post go without saying something though. Shaq loves the kids, well other people's kids. When they act up I can give their asses right back. Anyway, I used to think their first son was just adorable.

Now the child simply looks like a window licker. I thought it was wrong how people would talk about the size of the child's head but fuck it, IT'S HUGE. Before I go on, if anyone knows if this child has a condition...let me know. I don't want to go off not knowing if something is truly wrong with him. See this picture below, I think it explains my case a little better.

If this does not scream short little bus, I don't know what does. Also, did anyone know this couple has a set of twin girls? You would never know, all she does is bring Heady Murphy to all the games. She must keep the girls working in the crypt while they're out. Since I plan on not having kids of my own, I can poke fun of other's kids. It's not right, I know but it's ok.

I see you though, Joumana. I wonder where he found this one at? Even she is too damn cute for Jason Kidd.

I wonder, wonder who...will be the next one to recieve the award. Stay tuned.
Posted by Mail Order Girlfriend at 12:48 AM

That little boy musta had an animal living in his head! That shit was huge! Luckly, he grew into that shit, but he still looks like a crazy ass light-skined (yeah, skinded) version of JaRule.

LOL -- Jerzeygyrl, you a fewl!

As for J. Kidd, why is it that the cutest men are always the craziest?

Extreme cruelty? Is this Negro serious? Ain't enough "nigga, please" in the world!

As a card carrying member of the Big Forehead Group, I am shocked and appalled at this post.

I don't have NO problem talking 'bout ugly azz little kids. I used to say that Bobbi Kristina was a ugly azz little girl and used to get side-eyed like nobodys bizness but did I care. Nope! That little boys head is beyond big.

DNA Lottery. Is that how the Lord does it? LOL, yes TB is a fool.

Coco, don't let a cute face fool you. Crazy comes in all shapes, sizes and forms. And J. Kidd is indeed crazy. Busting a woman's lip over a french fry.

Kris, you know I'm sorry. I'm almost positive though your situation is not like this kid's situation. He doesn't have a big forehead, he has a big head. Period.

Jay, this is why we get along. I have and will contunue to talk about children. I've met some children who I believe work for the devil. They are not exempt from getting bashed.

Your blog keeps getting better and better! Your older articles are not as good as newer ones you have a lot more creativity and originality now keep it up!