Pastor with 666 tattoo claims to be divine 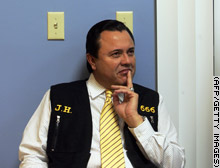 I intially wanted to post this as a Nigga Please moment but I'm not even going to mess with G-d like this today. I'll let Jose Luis de Jesus Miranda do that this evening. Yes, this man up above is a minister who claims he is G-d, himself. OF course De Jesus' claims of divinity have angered Christian leaders, who say he is a fake. Religious experts say he may be something much more dangerous, a cult leader who really believes he is G-d. His church claims thousands of members in 30 countries. Sounds like he's cleaning up to me.

De Jesus, 61, grew up poor in Puerto Rico. He says he served stints in prison there for petty theft and says he was a heroin addict. De Jesus says he learned he was Jesus reincarnate when he was visited in a dream by angels.

"The prophets, they spoke about me. It took me time to learn that, but I am what they were expecting, what they have been expecting for 2,000 years," de Jesus says.

He says he has a church-paid salary of $136,000 but lives more lavishly than that. During an interview, he showed off a diamond-encrusted Rolex to a CNN crew and said he has three just like them. He travels in armored Lexuses and BMWs, he says, for his safety. All are gifts from his devoted followers. He also has a tattoo of 666 on his forearm.

You know, none of this is funny! This man has thousands of people believing he is G-d. I'm not even mad at him though, 'cause anyone who follows this HUMAN needs a swift kick in the forehead. To end, this one line right here lets me know this man is a fraud:

De Jesus preaches that there is no devil and no sin

You go to http://www.youtube.com and look at that oversized Dora doing the chicken noodle soup and tell me there is NO DEVIL ON EARTH!!!
Posted by Mail Order Girlfriend at 8:39 PM

First of all, that Dora video is PURE SATANIC EVIL.

Secondly, doesn't the Bible say something about false prophets? This man is obviously on a whole 'nother something, but he's given me no reason to think he's anything other than another version of the homeless man who sits at the end of my block, claiming that damnation and brimstone is coming for "all the fags."

Yea well, apparently that homeless man on your corner has not been homeless for very long...'cause if he was "all the fags" in the world would be his least concern.